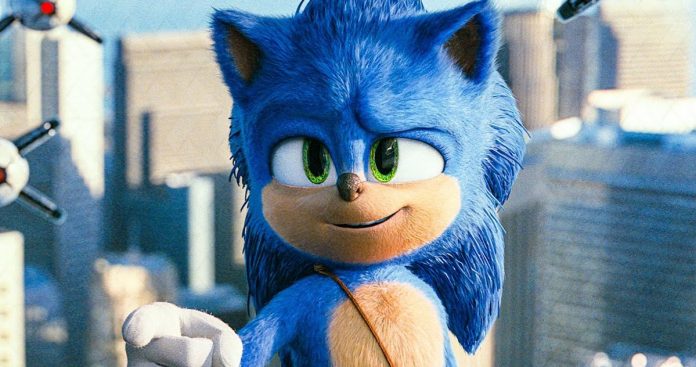 Sonic the Hedgehog triumphantly defies the onslaught of early social media criticism. Everyone who harped at the look of the character will be eating Sonic dust between fits of laughter. Sega’s classic video game hero is marvelously adapted to the big screen. A clever plot, stunning visual effects, and a return to comic form by Jim Carrey delivers a winner for the entire family. Raise your expectations. Sonic the Hedgehog is the first cinema surprise of the year.

We first meet Sonic (Ben Schwartz) as a baby blue hedgehog living on a distant world. Born with astonishing speed, Sonic gleefully zips around his home island. But his carefree existence is shaken by tragedy. Sonic, with the help of a loving guardian, is given a way to escape his planet. He is taught to run from those who try to steal his amazing gift.

James Marsden stars Tom Wachowski, the sheriff of Green Hills, Montana; a bucolic small town where absolutely nothing happens. Tom desperately wants to be a big city police officer. His caring, veterinarian wife (Tika Sumpter), supports his desire to join the San Francisco police department. Tom’s sleepy existence is shaken by an incredible power surge that causes a huge blackout. Wild-eyed locals claim it was caused by the mysterious “blue devil” that lives in the woods. The government sends the brilliant, but maniacal sociopath, Dr. Ivo Robotnik (Jim Carrey), to investigate the incident. He quickly deduces that whatever caused the blackout is a source of unlimited power.

RELATED: Jim Carrey Thinks His Dr. Robotnik and the Riddler Would Make a Great Team

Sonic the Hedgehog has a terrific script. Screenwriters Patrick Casey and Josh Miller infuse a lot of creativity into the Japanese source material. They establish Sonic as a compelling character who is desperately lonely. Sonic in the film is still a kid. He’s basically a little boy who observes human life, wants to make friends, and have fun. Sonic quickly becomes endearing to the audience. James Marsden, a great actor with fantastic timing, sells the relationship with an anthropomorphic, supersonic, CGI hedgehog.

Jim Carrey hasn’t been this funny since Dumb and Dumber To. He is hysterical and threatening as Dr. Robotnik. This villain is no pushover. His drone vehicles are lethal killing machines with all kinds of nasty weaponry. I can imagine the actual military watching this film and getting inspired by Robotnik’s gadgets. Carrey, of course, is outrageously bombastic. Other actors would look foolish. But he has the genius to pull off every facet of this diabolical, but knockdown funny character.

I had zero issues with the way Sonic looks. There must have been a parade of focus groups by the studio to fine tune the character design. There was a poor reaction to the trailer. The filmmakers heeded the internet tizzy and made changes. That history should not color your perception of the film. The finished product is what matters. Sonic the Hedgehog is entertaining from start to finish. There isn’t a dull second, but no rush to the story. The film nails the pacing and runtime to keep adults and kids enthralled. Sonic should race to the top of the weekend box office. Sonic the Hedgehog is produced by the Sega Sammy Group, Blur Studio, and Marza Animation Planet with distribution from Paramount Pictures.

The views and opinions expressed in this article are those of the author and do not necessarily reflect the official policy or position of Movieweb.

Film critic, raconteur, praying for dolphins to grow thumbs and do better.